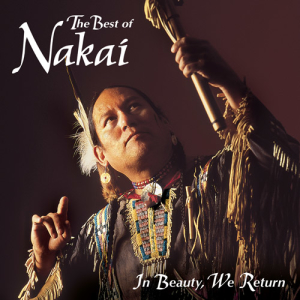 In 1983, R. Carlos Nakai (Diné/Ute) introduced the haunting and soothing sound of the Native American flute to the world and began an exploration of the musical possibilities of this traditional instrument. This collection of songs draws from the best of Nakai’s recordings and shows the range and versatility of his artistry and musical imagination.

In Beauty, We Return presents songs for solo flute, collaborations with other ethnic artists (Nawang Khechog & Wind Travelin’ Band), jazz (the R. Carlos Nakai Quartet), collaborations with Paul Horn and William Eaton and closes with the traditional flute in an orchestral setting.